Among the greatest delights of the Sierra Subbética are its wonderful rural hotels near Córdoba, many of which revolve around sustainable tourism, traditional Andalucian cuisine and ecofriendly accommodation among rippling olive groves. Here you’ll find some of the best small places to stay in Andalucía, all perfectly located for day trips to Córdoba and its millennium-old Mezquita, as well as Granada and the magical Alhambra, yet only 90 minutes from seaside Málaga, with its livery art scene. For a taste of authentic rural Andalucía, stay in an old olive farmhouse in Priego de Córdoba, at a family-run boutique hotel in Zuheros, at a grand mansion on Iznajar lake, and much more. 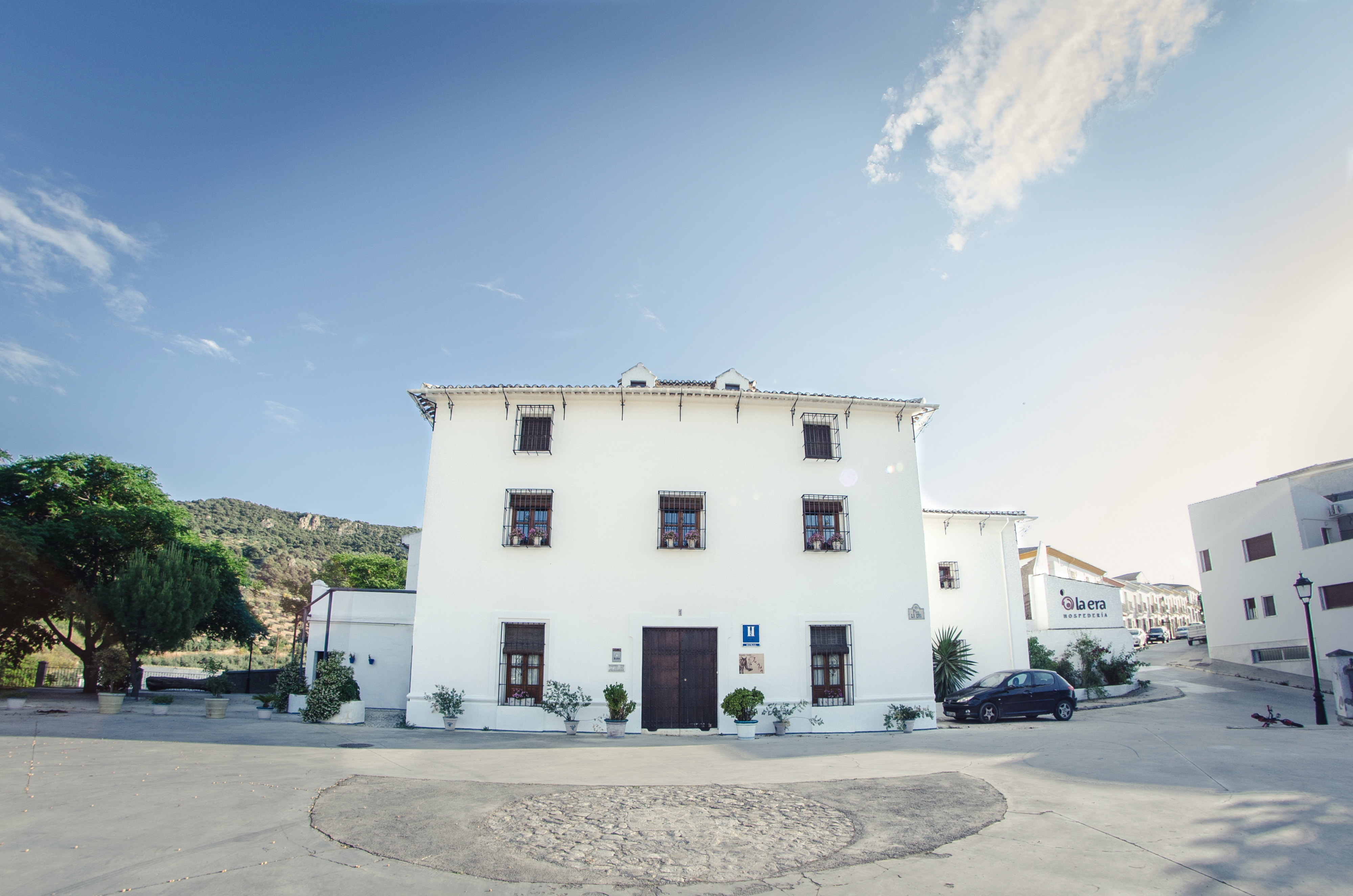 The Sierra Subbética is well known across Spain for its rural accommodation and small independent hotels. Resting at the heart of Andalucía, the region’s country hotels take in charming B&Bs, sustainable agroturismos and revamped finca hotels. All provide beautifully scenic accommodation for hikers and cyclists, as well as being a relaxing base for a country escape near Granada, Córdoba, Málaga, Jaén and beyond. Some of the best small hotels in the Subbética countryside include Finca Las Encinas near Iznájar, Hospedería La Era in Almedinilla, Cortijo de Frías in Cabra, Casa Olea and Hotel Huerta de las Palomas near Priego de Córdoba, and Hacienda Minerva along the Vía Verde del Aceite near Zuheros. 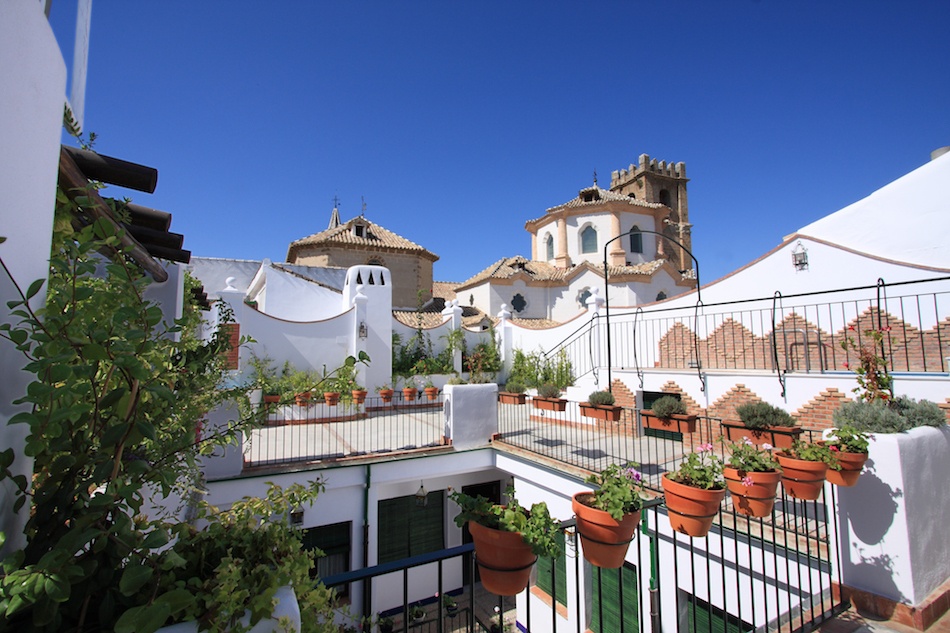 The Subbética’s lively towns make tempting bases too, with local restaurants, bars, sights and activities right on the doorstep. In Priego de Córdoba’s charming old town, enjoy the soothing Moorish baths and smartly rustic rooms at the lovely Casa Baños de la Villa, or sleep in a beautiful convent dating from 1512 at the Hospedería San Francisco. The Hotel Santo Domingo in the centre of historical Lucena is set in a restored 18th-century convent, with excellent restaurants nearby, while Doña Mencía’s modern-style Hotel Mencía Subbética has delightful terrace views from its perch near the Vía Verde. 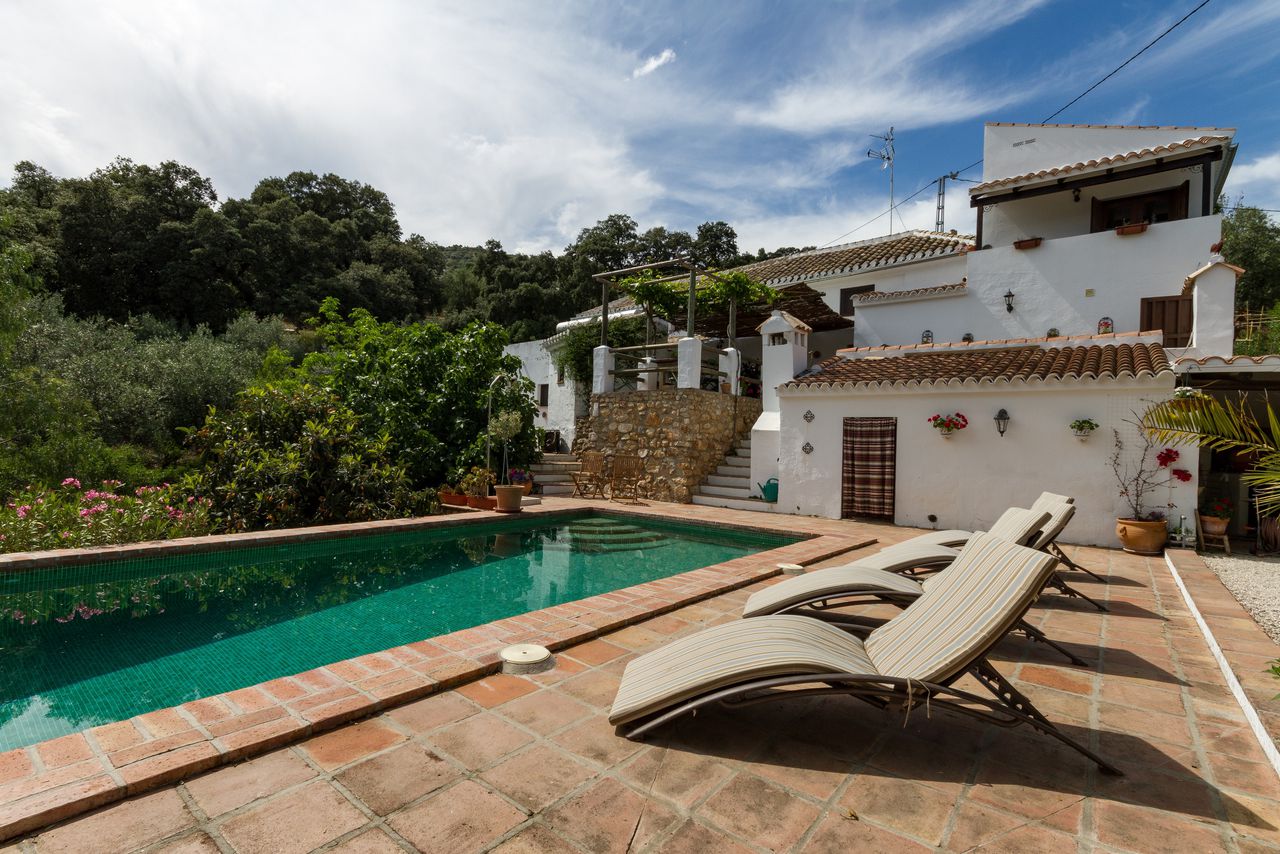 From revamped farmhouses hidden in the hills to smart boutique hotels in Córdoba’s white towns, many of the best places to stay in the Sierra Subbética are powerhouses of sustainable travel, running on renewable energy, championing local organic produce, showcasing traditional crafts and channelling resources back into the local community. Ecofriendly hotels such as Priego de Córdoba’s Casa Olea, Almedinilla’s Hospedería La Era and Iznájar’s Finca Las Encinas offer the chance to delve into sustainable tourism in Córdoba and explore this rewarding, untouristed Andalucian region without leaving a footprint. 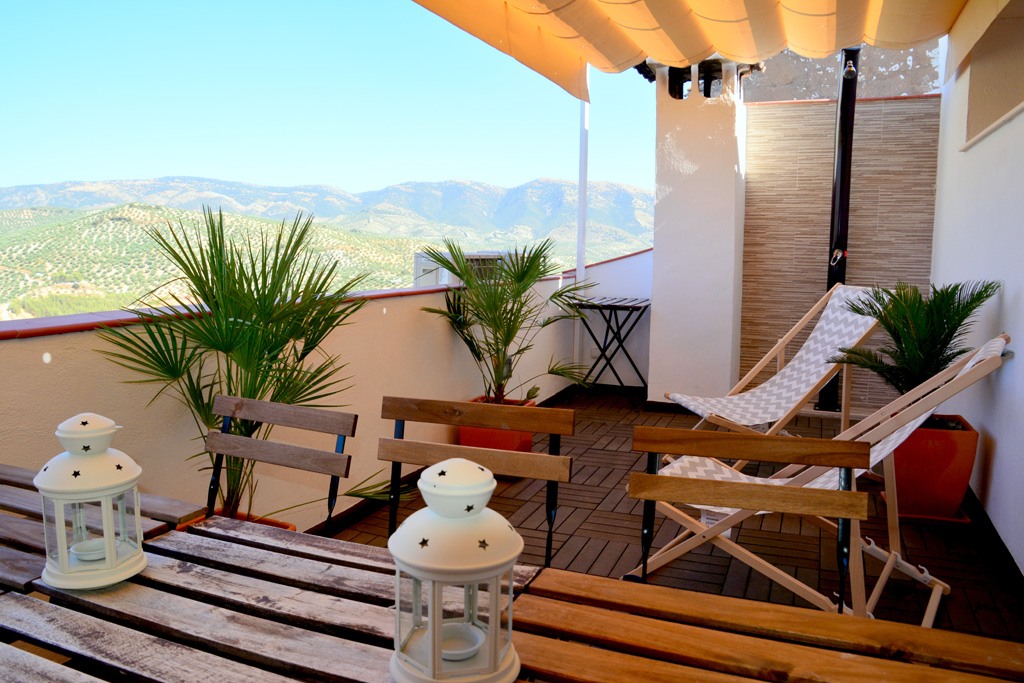 Whether you fancy a multi-room private villa out in the hills, a secluded Spanish farmstay or an atmospheric pueblo blanco (white village) hotel with the kids, family holidays in the Sierra Subbética lead you off Andalucía’s beaten track. Switched-on family-friendly hotels, such as the Caserío de Iznájar, keep visitors of all ages busy, and there are endless adventure activities, from horse riding, cycling and hiking to kayaking, paddle-boarding and rafting. Some of the smaller hotels and B&Bs (such as Casa Olea and Finca Las Encinas) can even be rented privately for family groups, giving you the best of both worlds – a private house with all the services and catering of a small hotel. 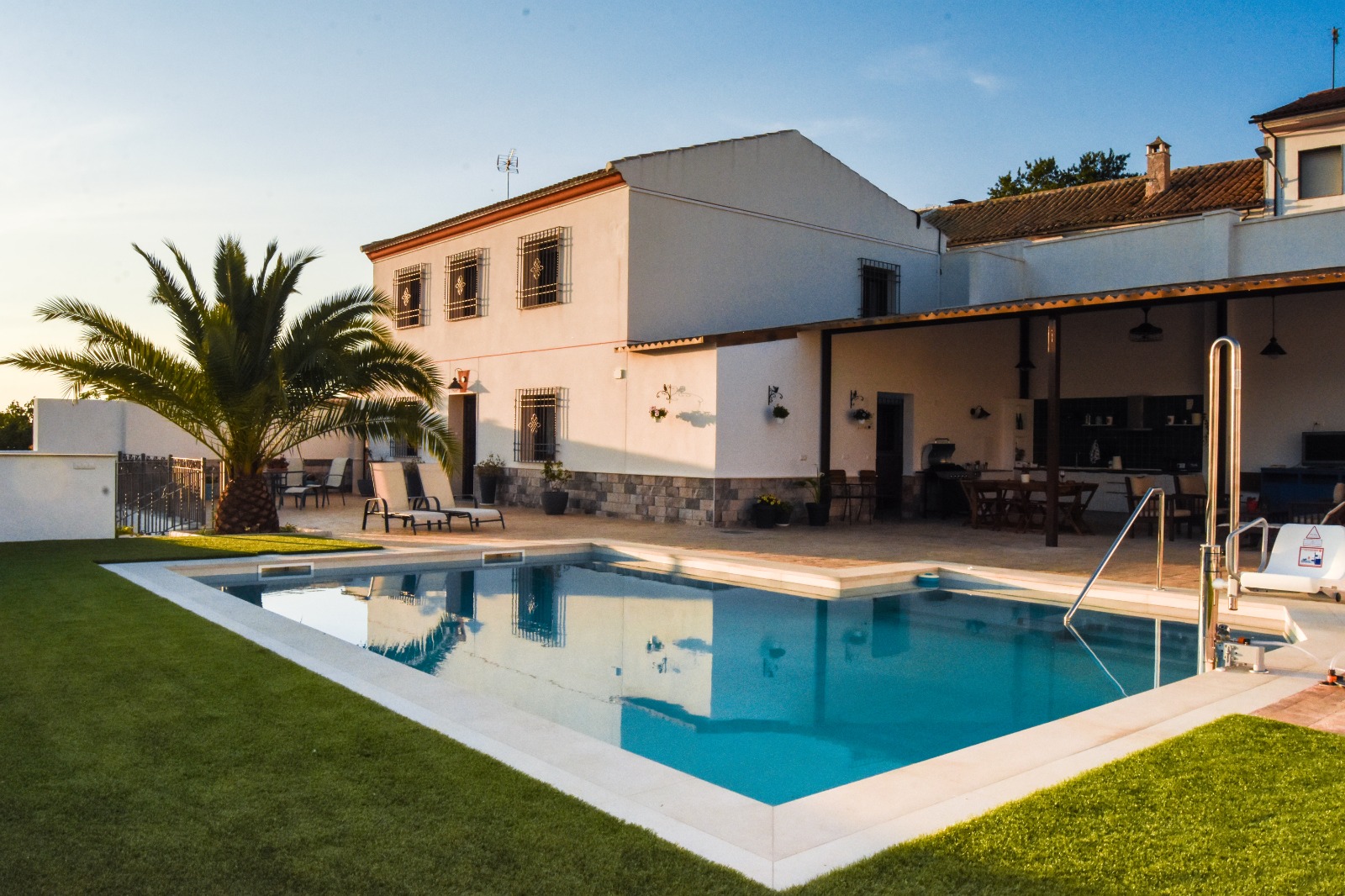 Visitors looking for self-catering accommodation and holiday rentals in the Sierra Subbética are spoilt for choice. Sprawling holiday villas with pools, stylish private apartments and cheerful casas rurales (rural houses adapted for tourist accommodation) are among the enticing options for independent travellers and families. Stay amid the baroque churches of Priego de Córdoba (perhaps at Casas del Mejorato), near the water sports on Iznájar lake (try Casa Rural La Era near Rute), out in the secluded olive-studded countryside, or near the Vía Verde del Aceite for superb walking and biking along a disused railway line (check out the thoughtfully restored farmhouse Los Castillarejos between Zuheros and Luque or contemporary-design Anlua Loft in Luque). 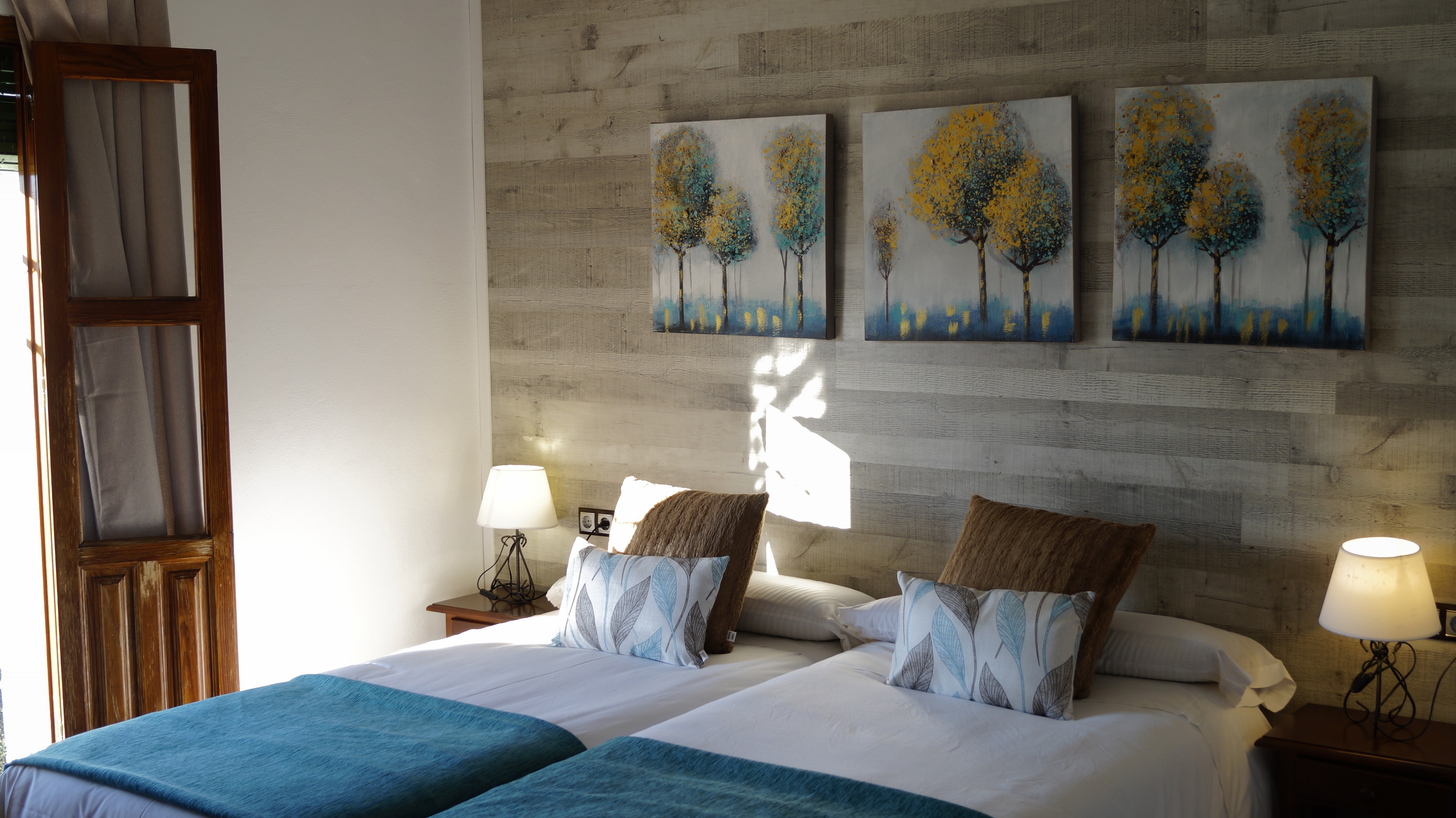 A jewel of undiscovered Andalucía, the Subbética also makes a fabulous romantic escape. The chic boutique hotels, peaceful farmhouses, cosy country retreats and converted historical buildings here are ideal bases from which to go walking in the natural park, venture out on a day trip to Granada and the Alhambra or Córdoba’s Mezquita, wander the white villages, try water sports on the local rivers and lakes, and enjoy romantic meals rooted in fresh Andalucian produce. 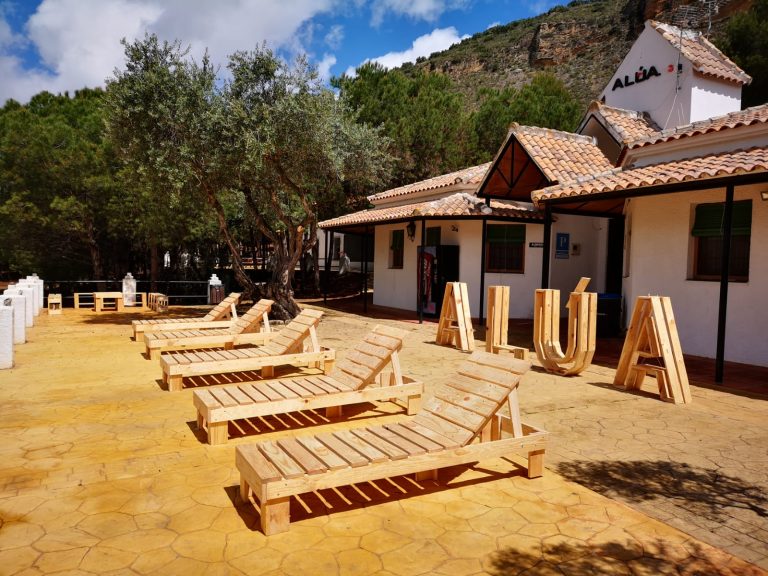 If you’re keen to escape it all in inland Andalucía and go camping in the Sierra Subbética, there are plenty of tempting campsites near Córdoba’s white towns and the natural park. Camping-Rafting Benamejí has adventure activities, cosy bungalows, tent pitches and caravan sites within a nature reserve overlooking the Genil river, between Antequera and Córdoba. And the Albergue Escuela Náutica Iznájar offers dorm rooms, wooden bungalows, camping space and outdoor activities right by the beach on Iznájar lake. 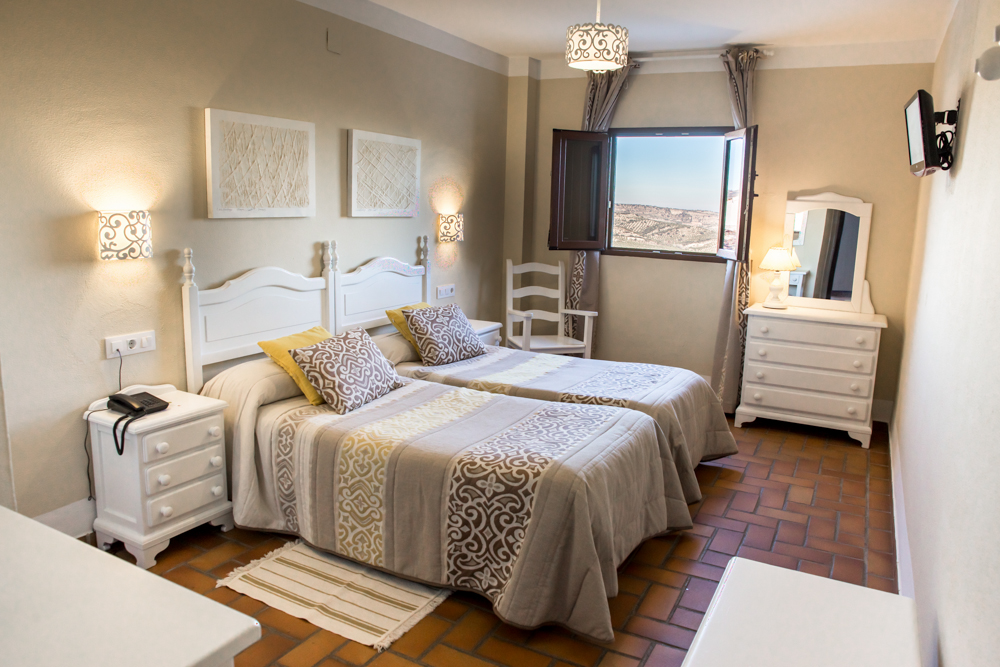 Rooms with a view

Rugged mountain peaks, Iznájar’s glinting lake and swirls of scented olive groves are just some of the dazzling views you’ll enjoy from the Subbética’s calming hotels and B&Bs. The Hotel Zuhayra looks out on gleaming-white streets and rolling countryside near the old Moorish castle in Zuheros; the Caserío de Iznájar basks in sparkling views across a sprawling turquoise reservoir (including from the pool); and both Casa Olea and Finca Las Encinas are surrounded by hills carpeted with olive trees. 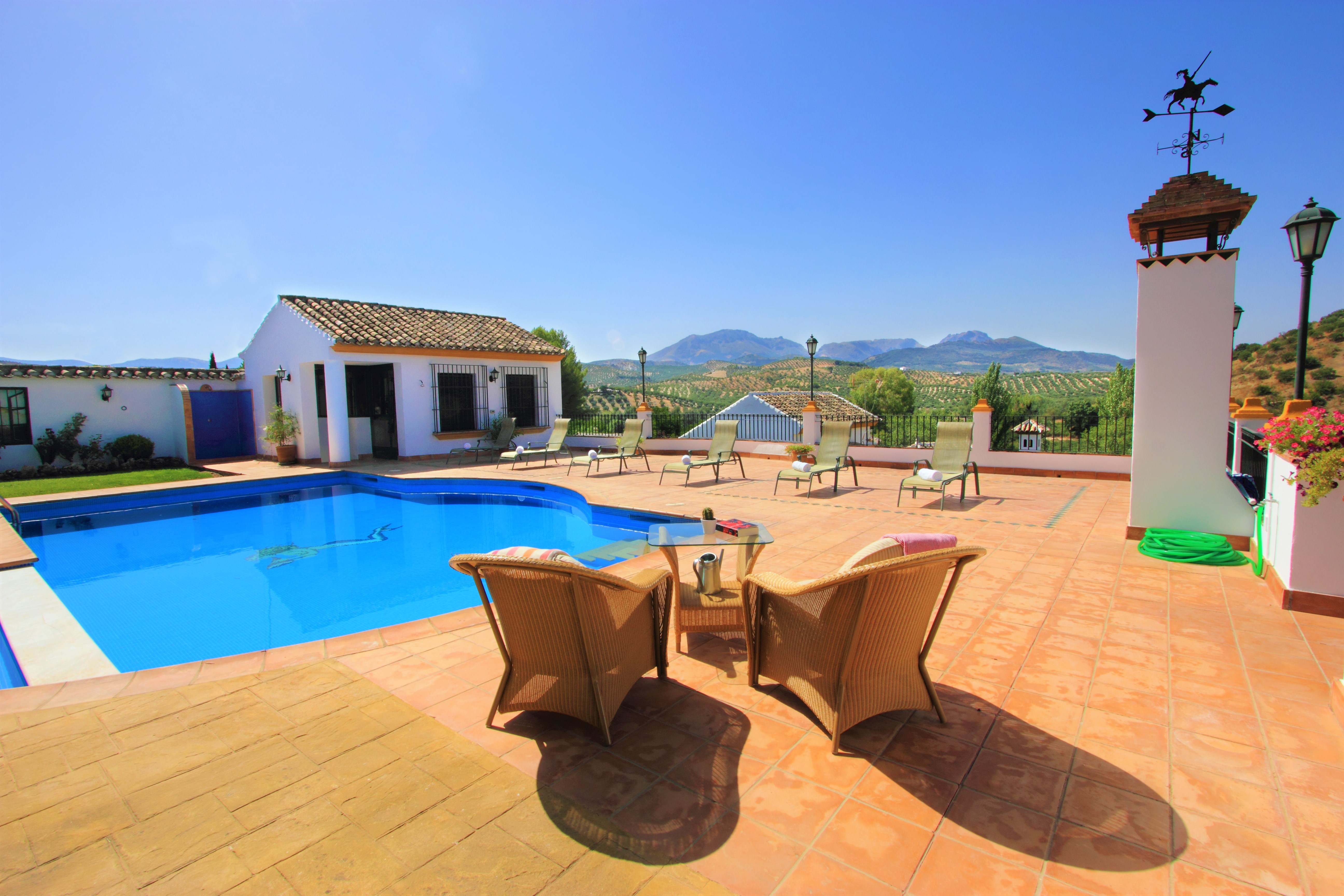 The best hotels in the Sierra Subbética

Casa Olea This ancient farmhouse, in a peaceful river valley near Priego de Córdoba, is now a beautifully converted sustainable hotel, offering six comfortable modern-rustic rooms, a spectacular pool and tasty home-cooked meals. The British owners make their own olive oil from the surrounding trees and put a strong focus on nature, cycling and walking.

Hospedería La Era Another ecofriendly beauty of a Córdoba rural hotel, on the edge of Almedinilla village, with a relaxing pool, lovingly prepared meals packed with local ingredients, and rooms inspired by Andalucía’s Moorish and Roman history.

Finca Las Encinas Views sprawl across the olive groves from this family-run rural B&B near Iznájar, on the south side of the Subbética natural park. It’s a gorgeously revamped 200-year-old finca for Spanish cooking courses, switching off by the pool and meals fuelled by home-grown produce.

Hotel Zuhayra Near the cragtop Moorish castle in the white village of Zuheros, Hotel Zuhayra is known for its charmingly rustic rooms, sweeping panoramas, excellent Andalucian restaurant and small but inviting pool.

Casa Baños de la Villa Dive into Andalucía’s history at this magical Moorish bath house and intimate spa hotel in Priego de Córdoba, where you can explore the white town’s baroque architecture before having a massage.

Hotel Huerta de las Palomas Built in the style of a typical Andalucian hacienda, near Priego de Córdoba, this smartly rustic hotel has 30 cosy rooms set around a traditional patio, excellent food, a pool and even a jacuzzi.

IZNÁJAR, WHERE TO SLEEP, Optional
0

WHERE TO SLEEP, ZUHEROS, Optional
0

RUTE, WHERE TO SLEEP, Optional
0

LUCENA, WHERE TO SLEEP, Optional
0

WHERE TO SLEEP, ZUHEROS, Optional
0

RUTE, WHERE TO SLEEP, Optional
0

LUQUE, WHERE TO SLEEP
0

IZNÁJAR, WHERE TO SLEEP, Optional
0

LUCENA, WHERE TO SLEEP
0

ALMEDINILLA, WHERE TO SLEEP, Optional
0

DOÑA MENCIA, WHERE TO SLEEP, Optional
0